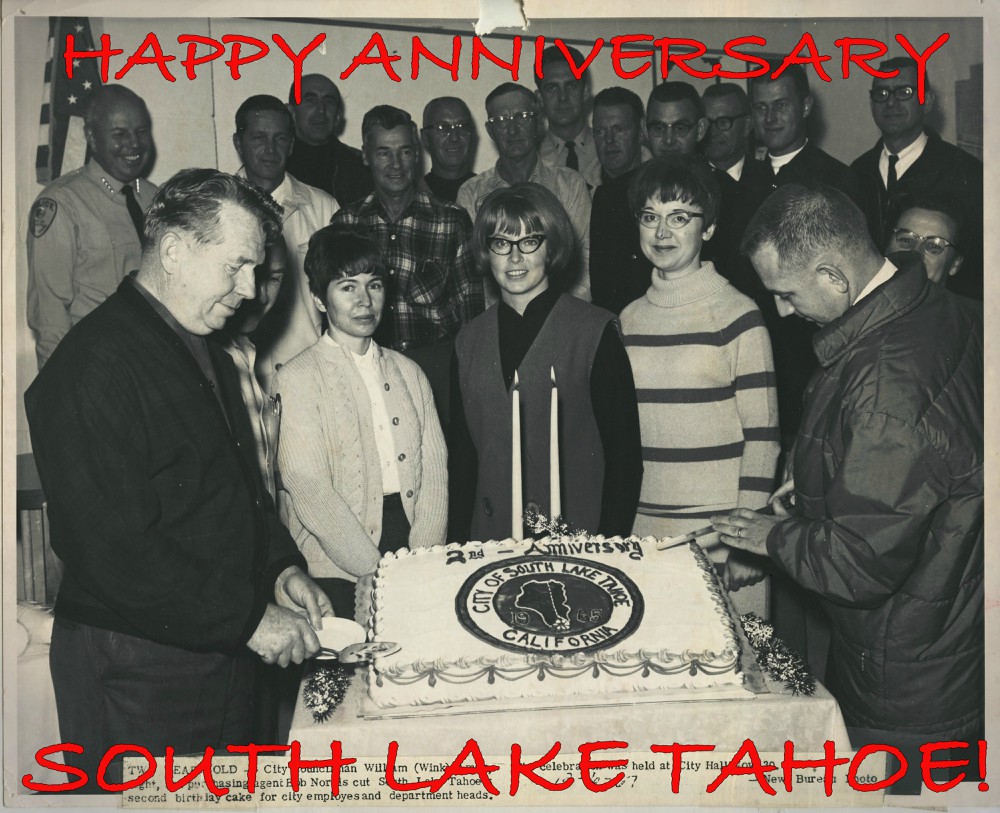 The City of South Lake Tahoe is 50 years old!

This year’s anniversary theme is “Past, Present, and Future”. 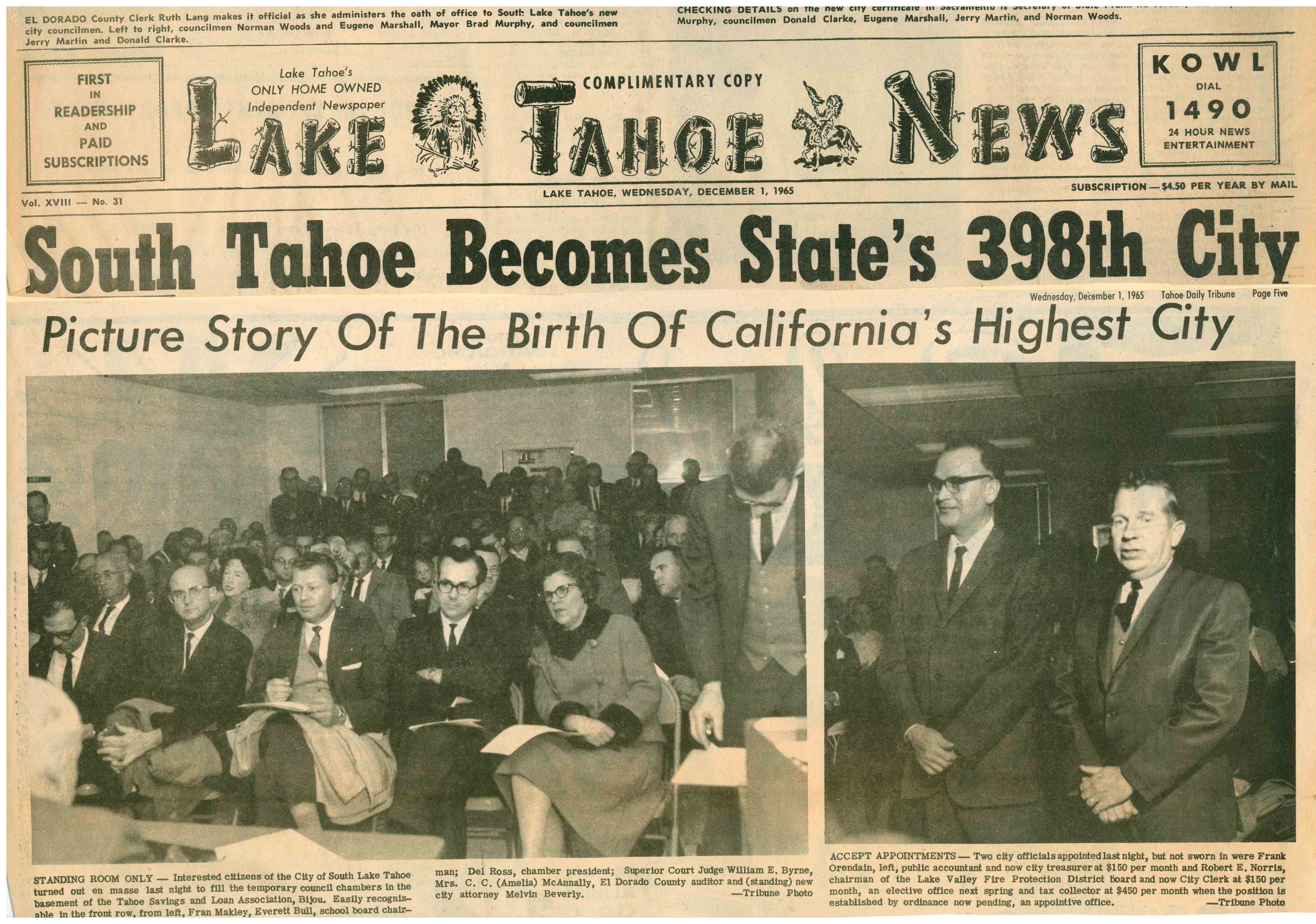 Fifty years ago, community members throughout South Lake Tahoe came together and determined the best course of action for their future was self-governance. After many years of preparing, planning, neighborhood meetings and door-to-door conversations, on November 30, 1965 individual neighborhoods became one city: The City of South Lake Tahoe.

Since then the City of South Lake Tahoe has grown to include a multitude of amenities. Did you know that the Bijou Golf Course was opened in 1920 with the same configuration it has today? The City purchased the golf course to establish the city municipal course from the Johnson-Springmeyer family in 1983.

And let’s not forget the 1960’s winter Olympics, which tipped the world off on this beautiful gem nestled in the Eastern Sierras. Tahoe has since grown from a sleepy ski town to a worldwide recreation destination capable of hosting thousands of visitors at any given day! 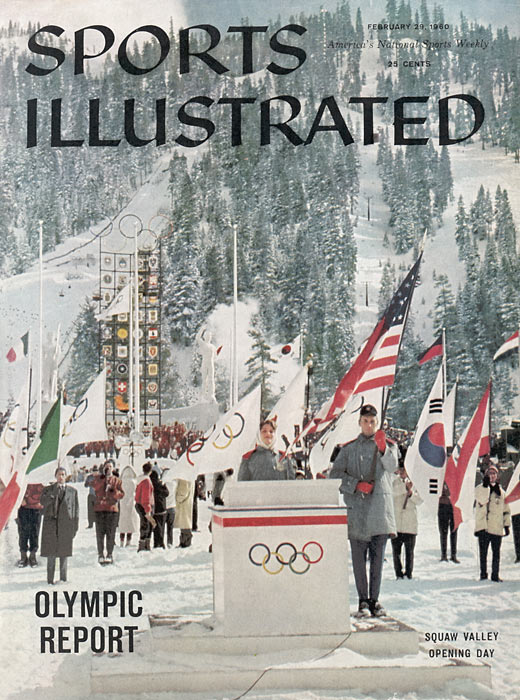 The City has spent the past six months promoting the 50th Anniversary with events including the Fire Department and City Hall Open House events, a History Hunt and the September Parade. The City’s signature summer concert series, Live at Lakeview, brought the community and visitors together with ten free shows featuring live music, a tent village, and food vendors.

The opening of the new Bijou Bike Park, summer 2015, is a huge milestone for the City of South Lake Tahoe. Located within the Bijou Community Park, the new bike park offers multiple level options so any rider can enjoy the park. The bike park joins an existing community park, disc golf course, skateboard park, basketball court and derby rink.

On November 7, 2015, the City is hosting the community’s 50th anniversary celebration and “golden gala” at Lake Tahoe Resort Hotel. The celebration will recognize founding leaders, community organizations, community members and the many accomplishments of the past 50 years. Tickets for the event were limited and are no longer available.

“The City’s 50th Anniversary Gala is a pinnacle of the events and we look forward to closing out the year with the Light up Lake Tahoe event on December 5th,” said Tracy Franklin, city public information officer.

The Tahoe Journal will be there taking photos on the red carpet, so check back for complete coverage. More information for the Light up Lake Tahoe event on December 5th coming soon!

As the mysterious hands of time continue to develop the “small and quirky” City of South Lake Tahoe, we all ponder the same questions. What will become of our beloved city? What new developments are afoot, and how will they function to improve our community?

Only time will tell.

But what we know for certain is The City of South Lake Tahoe is a tight-knit community comprised of individuals who care deeply for our home. From our leaders to our neighbors to ourselves, we can work together to continue building a better future for this beautiful town we have the gift of calling ‘home’.

Join us as we reflect on the past 50 years in Tahoe with the photo album below!

If anyone has more information regarding a certain photo (which is very likely, hah!) please feel free to send us a better caption at contact@thetahoejournal.com!

Tahoe's fine selection of young professionals once again gathered for another epic networking session.  The mixer was held at the new and improved McP's at Stateline...
Read more
Adventure

By Laura Van Antwerp— The candles are lit. There's smooth jazz playing in the background. I'm wearing my finest pair of oversized, coffee-stained sweatpants. And the...
Read more
Adventure

Live at Lakeview with Lavish Green