Where to go for St. Patty’s in South Lake!

*Tis the season to get tipsy!*

That’s right! St. Pattys Day has arrived which means it’s time to grab your fiddle and get crunk on that green beer and Jamo!

But where, oh, WHERE shall we go to get crunk on green beer and Jamo? These are the crucial questions of our lives.

And we’ve got answers…. 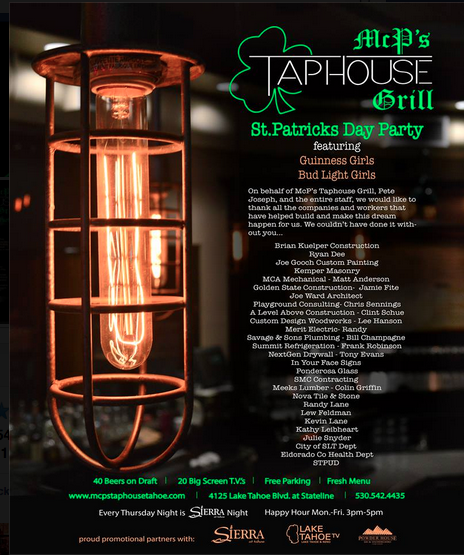 You better believe McP’s is the spot to go to celebrate the feast of the patron saint of Ireland! McP’s is Tahoe’s OG Irish pub!

McP’s will be featuring a bunch of shot and drink specials for the big day. Has it been a while since you’ve seen a hot chick? Us too. Budweiser, Tullamore Dew, and Guiness will be sending a flock of beauties whose sole mission is to give you the thickest beer goggles you’ve ever worn.

If the lure of hot chicks and drink specials isn’t enough to get you through the door, what about the chance to take home a BRAND NEW DC SNOWBOARD!! (Because let’s be real, the chances of that happening with one of the Budweiser girls is slim to none. Leaning towards none.)

McP’s will be raffling off a DC snowboard at the end of the night! All proceeds from the raffle will go to the Animal Coalition of Tahoe. That’s right—you’ll be able to multi-task your partying with some do-gooding. Be sure to write your mom about it afterwards, she’ll be proud.

Did we mention live music? No?

2. Riva Grill on the Lake 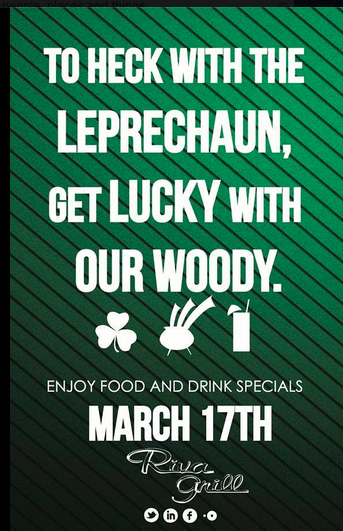 In the mood to catch the sunset over the lake while sipping (chugging?) on your festive beverages?

Riva will be featuring specials on Irish Woodys, Guiness, Irish Coffee, and, of course, your old friend JAMESON!

Worried you may come down with some munchies after you throw back a few too many Irish Woodys? Worry not! Riva’s culinary team will be waiting on-and to make you the most succulent Reuben sandwich you’ve ever had.

If you’re lucky, it might even be made by chef Rojo, who is not Irish but rocks a fine drape of gingery hair. Close enough, right?

Did we mention a great view of the lake? Boo-yah!

Where the heck is Riva Grill?
900 Ski Run Blvd.

Every once in a while, like once a year around St. Patty’s day, the craving for pizza and Irish car bombs strikes. An odd combo, yes, but some things in this world just can’t be explained.

Basecamp will be offering $5 Irish Car Bombs and $3 Tullamore Dew and Guiness ALL DAY!

Yes, I said ALL DAY LONG!

No shame in your game if you want to get an early start. Just make sure you bring a friend who will let you know when you’re starting to get sloppy.

Where the heck is Bascamp?
In Heavenly Village next to the movie theatre!

Previous articleStep on the Gas and Head to Lake Tahoe!
Next articleDanny Sheehan and Ralston Snowskates

Text by Laura Jangles and Saniah Foy Illustrations by Pauline Katopka  IT'S A MATCH! According to statistics, 91% of Tahoe locals between the ages of 18-35 has swiped...
Read more
Lifestyle

5 Tips for Breaking Out of Your Tahoe Rut

5 Tips for Breaking Out of Your Tahoe Rut —By Laura Van Antwerp— Go ahead and answer the following questions in your head. Have you been feeling...
Read more
Outdoors

Bro, do you even camp? I'll tell you what you need for that backpacking trip your planning once you get to Tahoe. You're only there...
Read more
Load more
Facebook Instagram Twitter Youtube
© Copyright Tahoe Journal 2020