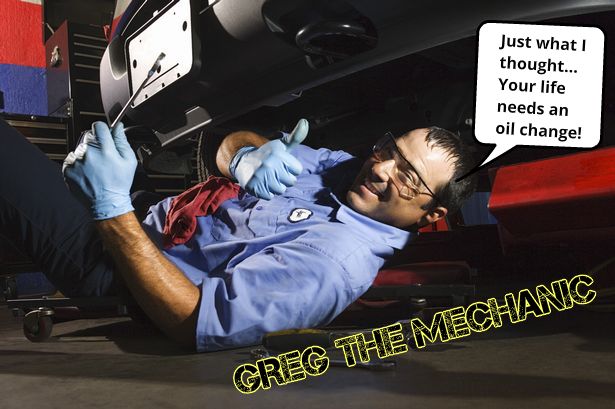 In need of some terrible advice from a completely unqualified individual?  Well, you’ve come to the right place!

This week’s not-so-sound advice will be served up by Greg, a local mechanic who thinks you could probably receive more wisdom from the engine he’s working on right now.

I’ve been in Tahoe for over five years now, and I’m convinced that most my friends are either alcoholics, deadbeats, or both.  All they do is drink, talk about dumb shit, and have no aspirations other than trying to smoke as much pot as possible.  I’m totally over that scene and ready to move on with my life, and I’m pretty sure that means having to leave my loser friends behind.  How do I let them down gently?

Ummmm, you do realize you are talking to a mechanic.  All we do is drink, talk about dumb shit, and aspire to smoke as much pot as possible.

But I have had a few old friends who I’ve barely talked to since they decided to ‘move on’.  One of my old buddies, who I thought was going to be a boozy mechanic for life, went back to school to become a financial advisor.  Weird, I know.

A few others went on to pursue more creative fields, and we barely talk anymore.  I guess it all happened naturally, so you probably don’t have to do much other than just move on.  You probably won’t have anything to talk about after a while, and you’ll most likely develop new circles of friends.

I mean, think about it – the main reason you guys hung out is because you had all that shit in common, right?  So once you don’t – it will take care of itself. That’s just my guess.  Good luck.

It’s my boyfriend’s birthday next month, and I’m just trying to decide what gift I want to get him.  I was thinking of either a power tool set (he’s a big handyman), or should I show up to his house in lingerie and a six pack of his favorite beer?

I’m thinking you should show up to his front door in lingerie, and when he opens it begin pouring beer all over yourself.  Once you’re covered in his favorite syrup, turn on his favorite power tool – let’s say its a power saw – and start sawing his front porch railing to prove your dexterity with machinery.  This is turn him on beyond your wildest expectations.

Are you like those guys on that NPR Car Talk show?  Do you have an accent like them?  Do you “YUCK YUCK YUCK” like those dudes?

I don’t know what you mean by “YUCK YUCK YUCK” – when I get grease on my hands?  Or when I chuckle?  And if I was anything like those dudes on NPR then I probably wouldn’t be working on cars anymore, just dishing out bad advice while I lay on my stacks of millions.