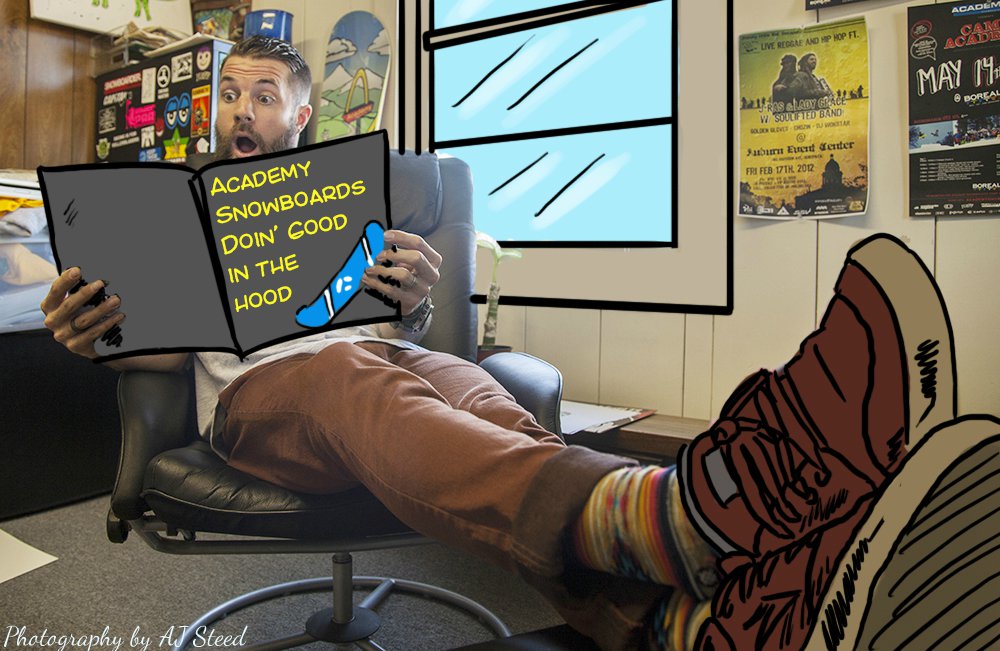 ur introduction is slowly winding down. We arrived early and we’re now seated in the office of Academy Snowboards’ chatting with sales manager Jason Martin, killing time as we anticipate the arrival of owner Jeff Baughn’s arrival. Our chat focuses on one very important topic.

Namely, the massive one that’s taking up prime real estate on Jason’s desk. No joke. There’s an entire pot within arms reach, from which I deduce two things: he must get a lot of sh*t done not to mention take about a zillion trips to the bathroom

Suddenly, Jeff bursts through the doors. “I’m so sorry I’m late!” he exclaims. “I was out helping the homeless!”

He’s not bragging. But he’s also not kidding. This is what the owner of Academy Snowboards does during his lunch break—helps out the homeless!

Badass? We think so. 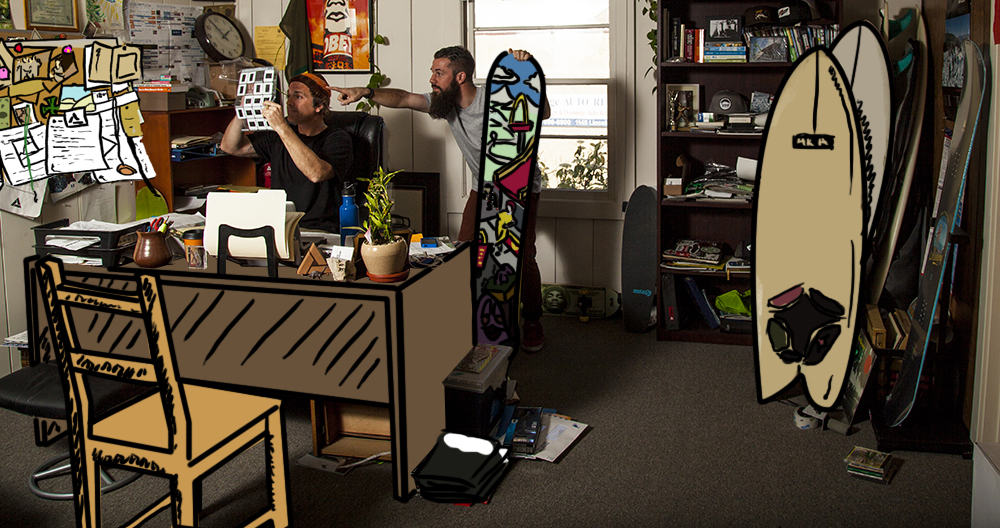 Our interest in Academy Snowboards was piqued after we kept hearing about the rad dudes over at Academy doing awesome things within the community. A dash of research revealed Academy is a rider owned and operated company focused on making top quality products (no Chinese manufacturing here!), supporting core shops and riders (those passionate about the sport, not the hype) and giving back to the community. Camps, scholarships, fundraisers—you name it, they’re doing it. 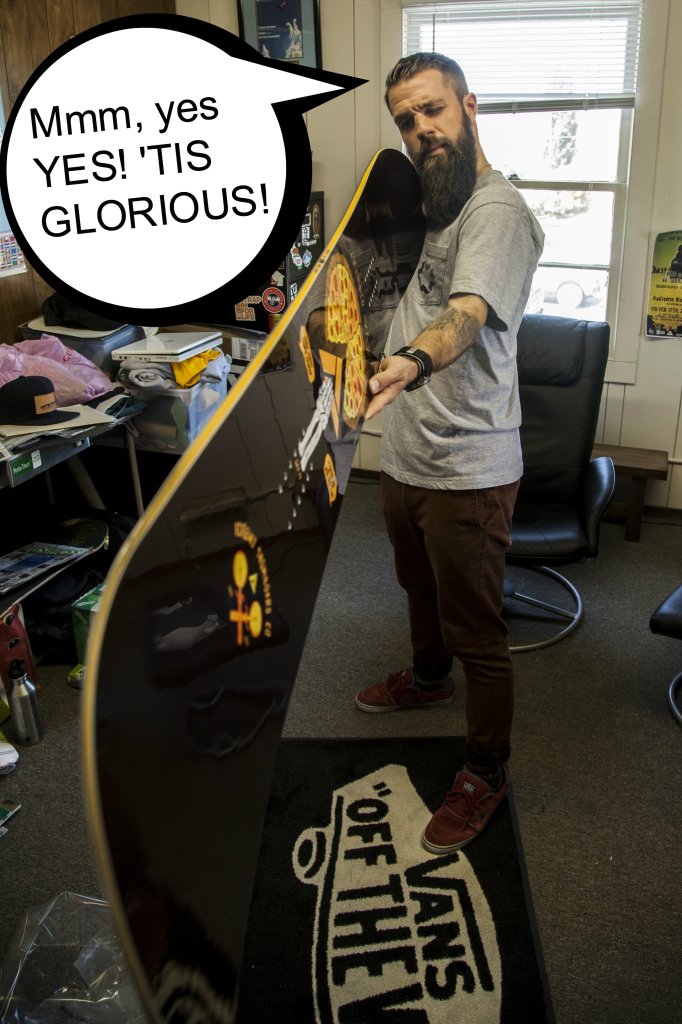 Once you meet these guys, however, it’s easy to sense their passion for the sport runs deep. It’s that impetus that drives the company and the desire to make the passion of snowboarding available to others.

Case in point: Camp Academy, a spring camp they operate every year at Boreal mountain. This shred-filled weekend provides individuals the opportunity to train with the pros, bond with fellow riders and take home tons of awesome swag.

And who doesn’t love swag?

If you think this camp just for groms, think again. As Jason informs us, “It’s for whoever wants to come out. We have everyone from five years old learning to ride to 50 year old dads who are wanting to learn to 360.” So if you’ve been dying to perfect your Michael Jackson, get on out to Academy Camp for some professional coaching on those twinkle toes!

As for students attempting to build a future when they’re not on the shred clock, Academy offers a scholarship program where students are awarded a $500 grant, two snowboards, as well as 1% of sales for the year.

“We wanna support the snowboarder who’s going to school and works park staff. Not necessarily the 4.0 scholar where all he does is school, but more like the shredder who’s getting an education and needs some help for books”

“Sorry I’m late! I was out helping the homeless!” – Jeff Baughn, just being casually awesome.

Peppered in between camps and scholarships, Academy stays busy with a variety of fundraising events. Coming soon this fall: a fundraiser to raise money for the local high school.

As far as the Academy family goes, they take the effort to set up their own people for future success. For instance, instead of churning and burning through team riders as most companies do, Academy looks for ways to bring those individuals on for the long run.

“I don’t bring on riders to be triple-corkers or X-games dudes.” JB points out. “Hopefully down the road they can add some value to the company in that we can eventually hire them. Riders are very expendable in a company, you know, they don’t have a long-term career. So when they come in here at Academy we try to teach them how to be interactive with us, come to trade shows with us, and become a party of the family.” 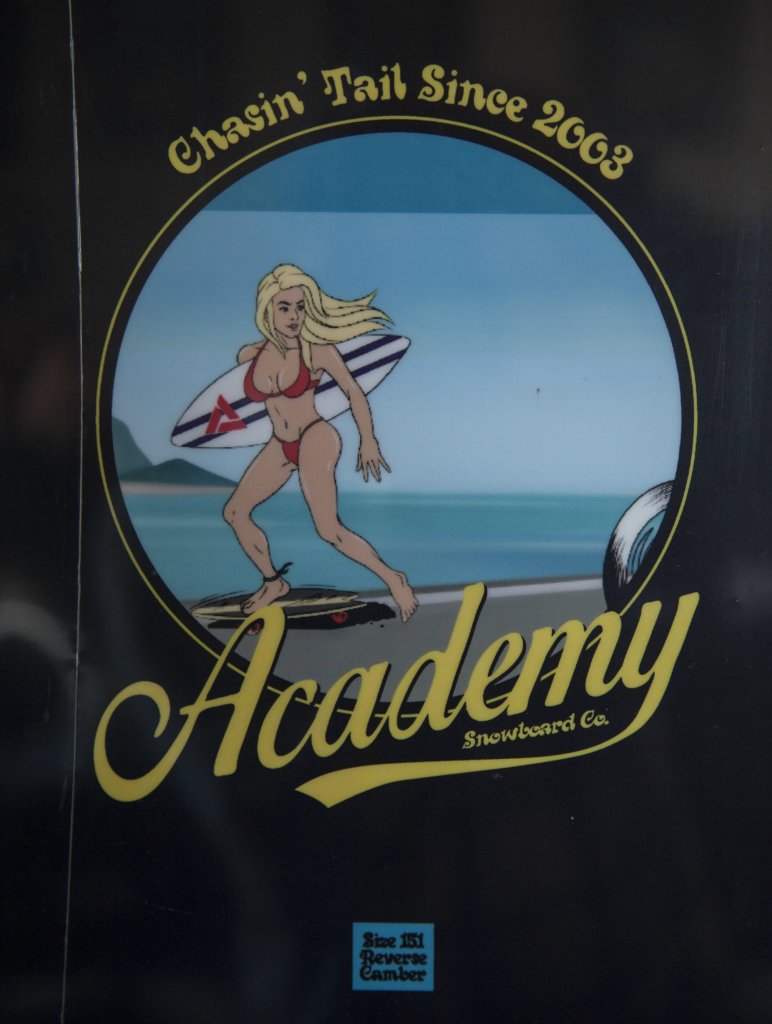 As far as their products go, you won’t be seeing them at REI or other corporate retailers anytime soon. Academy is all about networking within the community as well as supporting those mom-and-pop shops that we all fondly remember growing up.

“There are so many shops that are closing their doors; core shops that were such a big part of snowboarding growing and becoming what it is. We wanna support them. We need to support the core, brick-and-mortar shops.”

Over the course of the last 13 years of operation, Academy has navigated quite the dirt road in becoming the small, core company we know and love today. Let’s just say it hasn’t been all fruit loops and lucky charms. Just as many of us most likely experienced as teens, there have been some major growing pains for to work through.

“We took off. Academy rider Chad Otterstrom won team rider of the year and we had so many riders blowing up.” JB reflects. “We won the Transworld Team Challenge 2 years in a row, numerous Transworld Good Wood Board Tests. We had a lot of upcoming riders like Chris Grenier, Scott Stevens and Nick Dirks.”

With the rapid growth, however, came a need to keep pace financially.

“We needed budgets for these riders and we needed financing, so that’s when we brought in some investors. We learned the hard way that corporate America doesn’t give a rat’s ass about snowboarding, just trying to make a buck off us.”

While the company was able to expand significantly, it wasn’t long before JB realized the brand he had grown to love was being severely mismanaged.

“At one point we were huge, we had ten people working in-house. But they put us in China, our manufacturing was all screwed up. It was a nightmare. Academy got screwed and I knew I had to buy back the company. So when I bought it back I was like “we’re going get the best manufacturing, we’re going build the best product and take it back to how it was before it fell into the evil empire hands”.

JB points out the importance of taking time and doing your due diligence on who you partner with. If it sounds too good to be true—then it probably is. 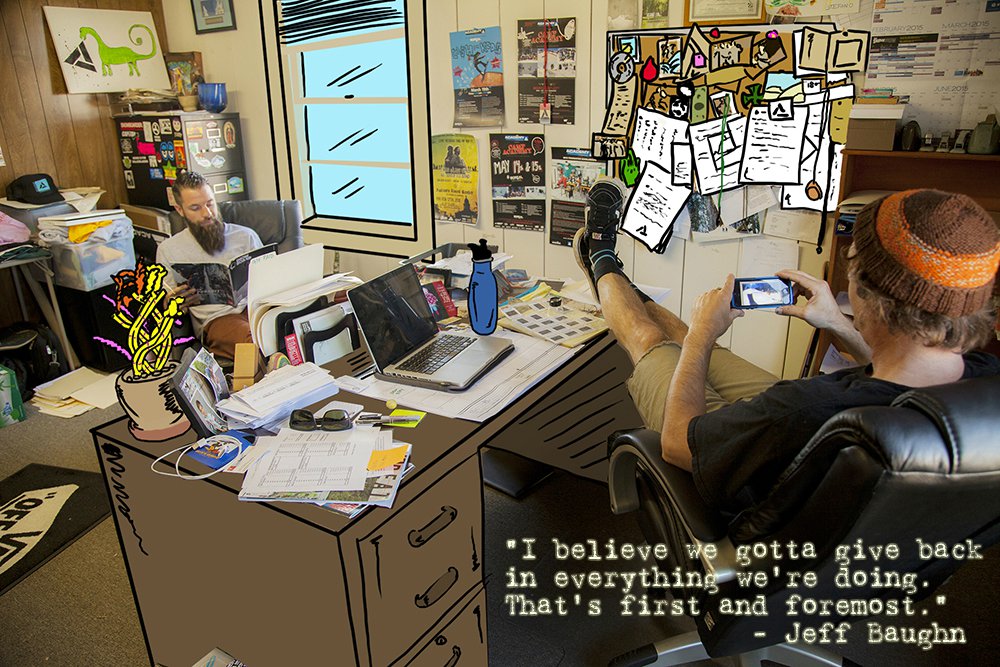 It’s been a bit of a roller coaster ride for Academy. Risks have been taken and lessons learned. The fact of the matter is, you’re not always going to get it right the first time. If there’s anything the tough times are there to teach us, it’s about getting back up and focusing what really matters.

As Academy has shown us, it can be done. And through it all, just remember what’s truly important: giving back.

“That’s why I believe we’ve been put here on this Earth.” JB tells us. “I mean, obviously my platform, you know, is to run a snowboard company, sell snowboards, and make some money. But I believe we gotta give back in everything we’re doing. That’s first and foremost.”

And give back they do! From the team riders to the spring campers to the student shredder to the homeless guy in need down the street. Generosity should know no bounds, and in the case of Academy Snowboards, it permeates all the way to those at the top.

So as it turns out, word on the street is true. Academy be doin’ all kinds of good in the hood. Let these guys be an inspiration to you and your own endeavors. And don’t forget to spread the word. 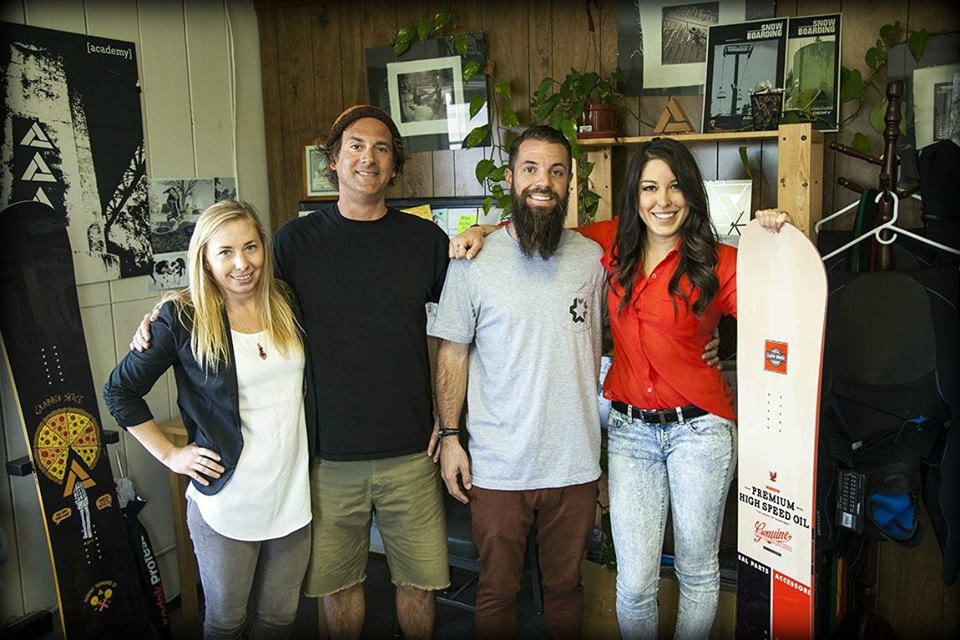 A huge thanks to the Academy guys for taking the time to let us pick their brains!

To learn more about Academy Snowboards, their camp, and their scholarship program, click on the following links!