The existential angst of growing old in Tahoe – an observation into the quarter-life crisis.

Do not go gentle into that good night,

Old age should burn and rave at close of day,

Rage, rage against the dying of the light.

Lake Tahoe is the type of town where as you grow older, everyone around you appears to stay the same age. Guys strut around in oversized hoodies and saggy beanies with unwarranted hubris and you wonder to yourself, “I can’t believe I used to like that!”

You see the girls trailing after these boys, emulating them in both style and swagger, and the thought, “I can’t believe that used to be me!” crosses your mind.

Back then the world was your oyster – an oyster you assumed would remain the same forever.

And as you shake your head, that’s when it hits you – you’re getting old.

Where did the time go? It feels as though it was just yesterday you were ‘shredding the gnar’, squandering the nights away at Opal, Whiskey Dicks, or some dimly lit house party. Back in those days the world was your oyster—an oyster you assumed would remain the same forever.

Come to find, forever was more ephemeral than you had anticipated. The roles remain the same, but the cast members have changed. There’s still the snowboarder ‘bros’, the girls in guys clothes, the guys in girls clothes, etc. Except now it feels as though you are on the outside looking in.

Once a participant in this subculture, it now only exists for you inside a theoretical snow globe sitting on your dresser—one which, when shaken, stirs not only flakes of snow but also tiny bottles of Popov and marijuana joints.

That’s the thing about ski towns – they tend to exude a certain youthful essence. There’s plenty of of old(er) individuals milling about, but it’s difficult to decipher whether they are young at heart or in denial of the passing of time. Twenty-one year olds act like they are eighteen, thirty year olds act like they are twenty-five, forty like they are thirty, and so on. It’s the kind of place where the postponement of marriage and family life serves as the norm, where ‘grown-up’ obligations are cast to the wayside.

Thirty, single, renting, and still driving that car you got in high school? In Tahoe, nobody bats an eye.  Bring up the aforementioned details during your annual visit to your hometown and *gasp*, what are you doing with your life! But you don’t care – you’ve never really had much of a taste for that which reflects stability. You’re driven by adventure, not a mortgage payment! 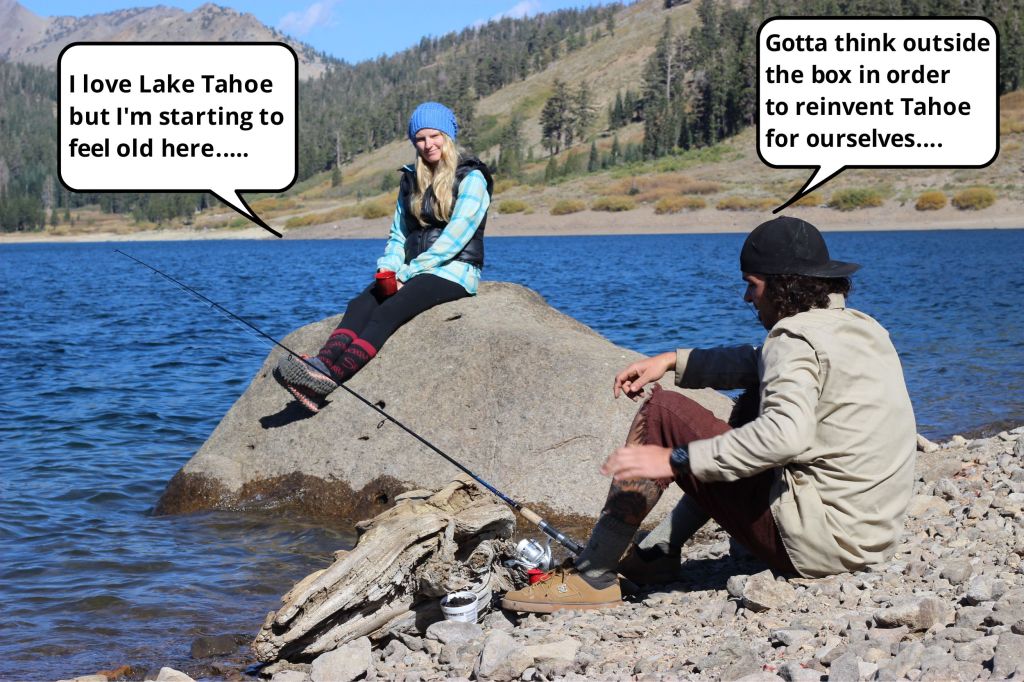 But then, it hits. The quarter-life crisis.

Right around the twenty-six mark. You feel as though you are stepping out of a dark hallway, one which you’ve been casually strolling through, no doubt solving life’s algorithm along the way. Unfortunately, you suck at math. And you’re just now realizing it.

You can’t be a liftie for life.  Nobody wants to hire a fifty year old waiter. You could get a job at Wells Fargo or Coldwell, but now that you’ve lived on the edge you could never settle for the banality of a 9-5 desk job.

You have, in pursuit of ski bum glory, essentially sabotaged your ability to lead a respectable white-collar life. What now?

You cry. You wallow. You take a shot of tequila. Then you feel like a loser for doing so. And so the conundrum goes.

But then something else happens. It dawns on you that…you also have nothing to lose.You don’t have a family or kids. You’re not tied down by your job.

So you decide to make the leap and do something amazing. You explore the world. You start a business. You move somewhere new. You discover new passions and talents you otherwise would have not had the time or energy to harness. You take a plunge into the unknown, unsure of the results but ready for whatever life throws at you.

And thus—you grow. Not into anybody in particular, but into yourself—into your own, weird, unorthodox life.

And suddenly, you love it.

You love it for all its sharp angles as much as for its lumpy spots. The disarray drapes nicely on you, so you decide to wear it.

And thus – you grow. Not into anybody in particular, but into yourself. And into your own, weird, unorthodox life. And suddenly, you love it. You love it for all its sharp angles as much as for its lumpy spots. The disarray drapes nicely on you, so you decide to wear it.

There’s a certain beauty in the existential angst that seems to hover cloud-like over people’s heads. It’s what happens when find ourselves at odds with our own restless nature. Our unabating desire for something more, something better, something greater, something we know we will never find if we simply hunker down and do what’s expected of us.

It’s what brought us together in Tahoe in the first place. In a town where everyone is from somewhere else, it’s a melting-pot concocted by our nomadic natures.

Tahoe’s transients may not have six figure incomes or stability, but they have stories and character. We are a town full of outcasts, late-bloomers, non-conformist go-getters, and dreamers. Our time and energy is offended by that which is dull and predictable.

Maybe it’s time to take that existential angst, to embrace it, and make something of it.

Because someday we’re going to be seventy years old. Those shaggy haired, beanie clad ‘kids’ will no doubt still be wandering around.

Amongst them, tried and true to the denizens of Tahoe, will be the twenty-somethings entering their own quarter-life crisis, the cloud of existential angst hovering over their heads just the same as you remember it. They will be wondering what life holds for them, where the next adventure lies, what they’ve been doing up to that point.

Because hindsight is 20/20, and you can’t help but reflect fondly on the past—the memories always seem to have a gold sheen to them.

Previous articleTahoe Through the Years! Celebrating 50 Years of Greatness!
Next articleWhat Are You Looking Forward to Most This Season?

5 Tips for Breaking Out of Your Tahoe Rut

5 Tips for Breaking Out of Your Tahoe Rut —By Laura Van Antwerp— Go ahead and answer the following questions in your head. Have you been feeling...
Read more
Lifestyle

—By AJ Steed— Recent sightings of Lake Tahoe's monster 'Tahoe Tessie' have been skyrocketing as tourists flood town for the summer season. With the proliferation of these events, The...
Read more
Adventure

By Jesse Plate— I've lived in Tahoe for a year and a half. In most comparisons with my former hyper-urban residences (Boston and New York...
Read more
Load more
Facebook Instagram Twitter Youtube
© Copyright Tahoe Journal 2020