It’s a cool, summer evening in South Lake Tahoe, a perfect night to take a cruise out on a traditional Venetian gondola. The Tahoe Journal team, Ryan, Meech, myself and our gondolier, Drew, are gliding through the Tahoe Keys Marina on Drew’s gondola—a long, flat-bottomed boat that is propelled by a single man-powered oar. Drew, who is paddling from the tail of the vessel, is dressed in his traditional gondolier garb, which consists of a large straw hat, a striped shirt and a red sash around his waist. 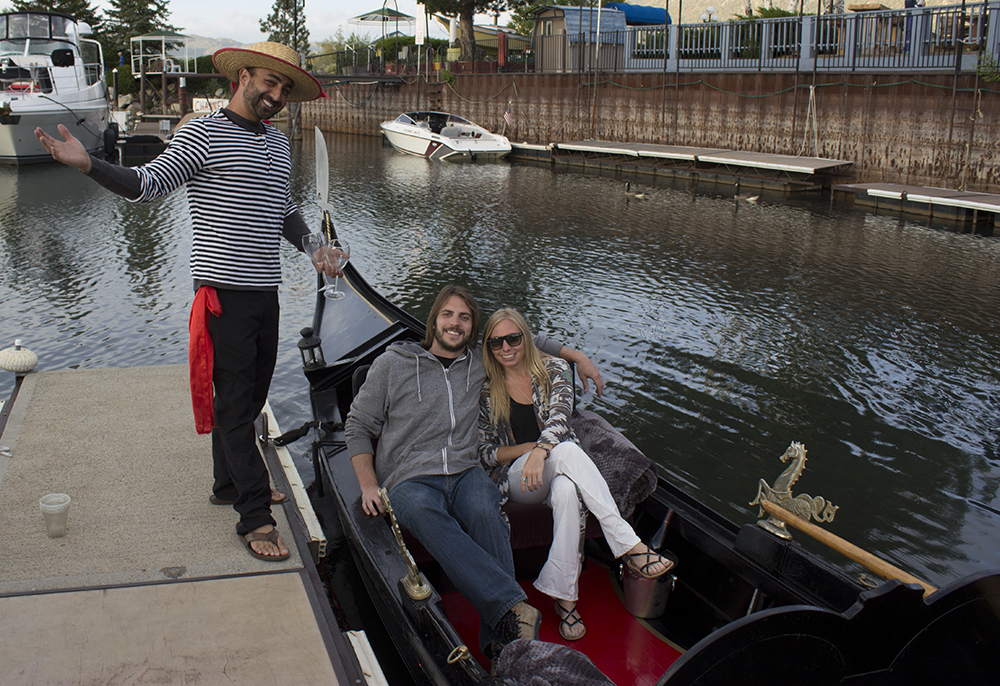 He’s also rocking a pair of straight-out-of-PacSun flip-flops, which I highly doubt pays homage to the uniform of the Venetian forefathers.

“I forgot my shoes today.” Drew points out, confirming that, indeed, the flops were improvised.

Drew’s movements are an exercise of both strength and grace as he effortlessly paddles the gondola through the marina. The smooth vocals of Frank Sinatra drift from a small boombox on the back of the gondola, accompanied by the rythmic “splish” each time Drew’s oar dips into the water.

It’s a quiet evening in the Keys, and gorgeous. The sky proudly models a technicolor dreamcoat as the sun declares last call. This summer has been filled with killer sunsets, and tonight is no exception.

I nestle deeper into the velvety cushion of my seat, taking a deep breath of the night air, which is tangibly infused with romance, hope, endless possibility, and—could it be—barbeque? Ah, Fresh Ketch, you’ve done it again!

Then, suddenly, someone screams “PEPPERONI!”

Did someone really scream out the name of a pizza topping to us? How cliché!

But Drew doesn’t miss a beat.

OK—I know I didn’t spell that right. In all honesty I have no idea what he said. All I know is that it sounds as tender and musical as anything spoken in Italian. He could just as well have said “Guess what! I have perpetual gas, come catch a whiff!” and I’m sure every woman within a quarter-mile radius would have swooned. 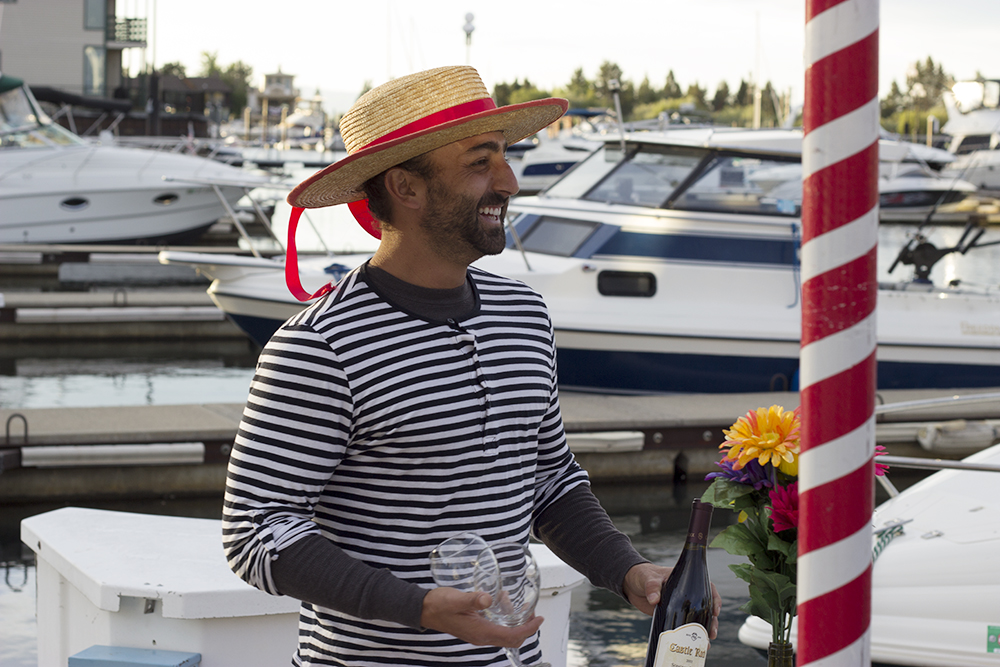 He’s the brains, brawn and pockets behind Tahoe Amore, the first Venetian gondola to glide through the waters of Lake Tahoe. Gondolas are most commonly known for cruising through the canals of Venice, Italy. However, over the last few decades this slice of Italian culture has become increasingly more popular in the states.

And now, thanks to Drew, Tahoe has officially joined the game.

Drew, 28, has been in the gondola game for over 13 years. He started in Southern California when he was just 16, which was standard for anyone his age in that region.

“I grew up in a beach town, so you either worked as a lifeguard, or as a gondolier. That job was fun through high school and college. Let’s just say we knew how to party!”

Drew went on to study broadcasting in college. He worked at a radio station for years after graduating but found it difficult to put his oar down.

“They would always call me to say, ‘Hey, can you work this New Year’s Eve? Or Valentine’s Day?’ It was always easier for them to bring me back than to train new people. Besides, the job is so fun, and the money’s so good, I couldn’t say no!”

Not to mention he’s great at what he does.

Aside from his adept capacity to steer a 27-foot-long boat with a single oar, he’s also a freakin’ great time! After the first ten minutes you feel as though you’ve known him for years. Drew’s got more personality in his left pinky than an entire NFL team.

Drew regales us with tales of men attempting to turn business meetings into dates (guy leans in for a smooch, woman dodges, awkwardness ensues) and two-timing couples showing up with different people on the same day. He’s seen engagement rings fly off the boat (“The guy hired divers to find the ring. They never did.”) and women shoot down proposals (“When she says no, this boat goes from 0 to 100 real quick!”).

And while he’s gotten used to serving as the jovial third-nautical-wheel for most rides, every once in a while he’ll find himself stuck with a couple that just wants to get freaky.

“You charge extra for that or what?” Meech had to ask.

“Nah.” Drew laughs. “I can tell when they just want me to shut up and paddle.”

Sorry, swingers of Tahoe, turns out there’s no secret menu on this cruise.

o why Tahoe? Why gondolas?

“You know, I never thought I would go on to do my own gondola business. But it would suck not to make a career out of something you have fun doing.” 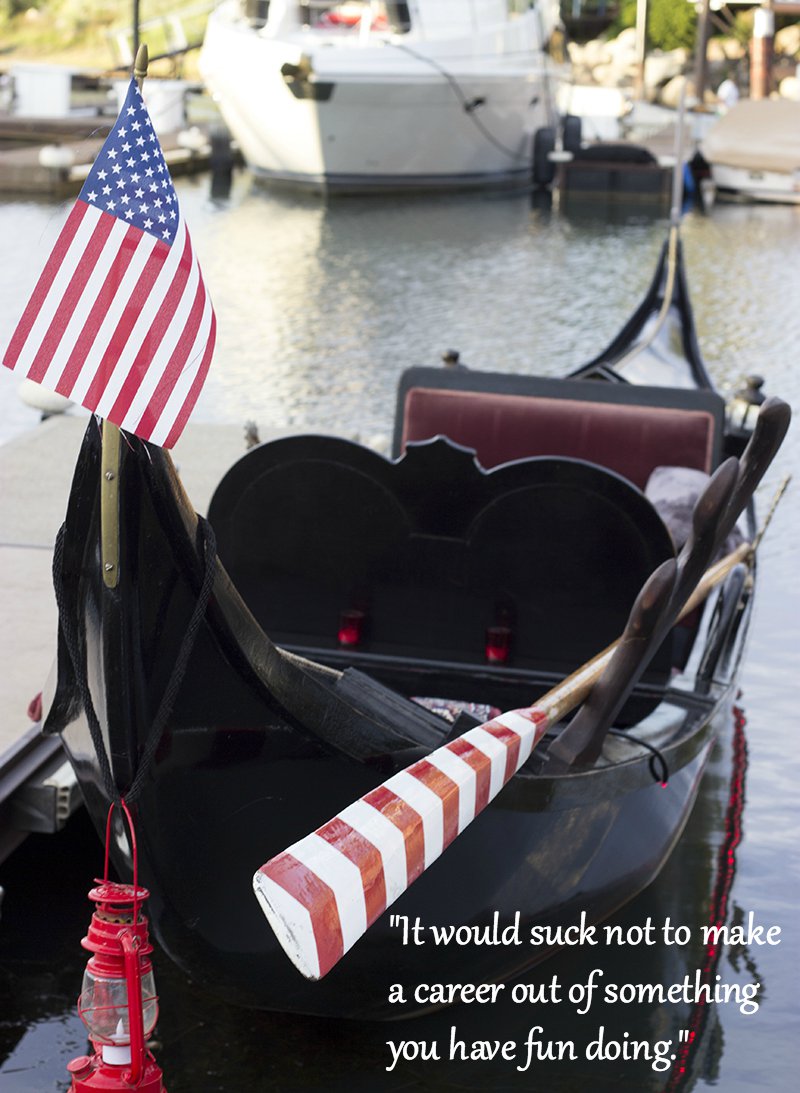 As any entrepreneur knows, especially a young one, it’s no easy feat starting a completely new endeavor from scratch. It requires a robust plan, a willingness to watch all the contents of your bank account melt away before your own eyes, and, most importantly, a butt-load of determination.

“It took me about a year to set up the whole business myself, and around about the six month line I got all scared. I thought, “It’s a cool idea but no, I shouldn’t do this. So I decided NOT to do it.”

And that was when Drew decided to quit. He dropped everything.

That is, for about a week.

“I was so bored for that week. It was during that time I realized—I’m not married. I don’t have kids. I realized I didn’t have anything to lose. And that’s what got the gears spinning again.”

Drew hasn’t looked back since.

There have been a few obstacles along the way. Naturally, as with any new business, there has been concern about Drew’s gondola on the waters of Lake Tahoe.

“This is a new business, they don’t know what to expect of it. They might think I’m just some weird, river rafting, Waldo-looking guy. But it’s a peaceful business. There’s no engine, I’m not polluting anything.”

Drew hopes that after the city realizes what he has to offer through his gondola cruises, they’ll eventually allow him to bring more boats.

“I would want maybe three different boats, for different types of cruises. But that’s it. I want to keep it small.”

How well-received his gondola cruises are by both tourists and locals is something only time will tell. In either respect, it will be an interesting journey for the budding business. 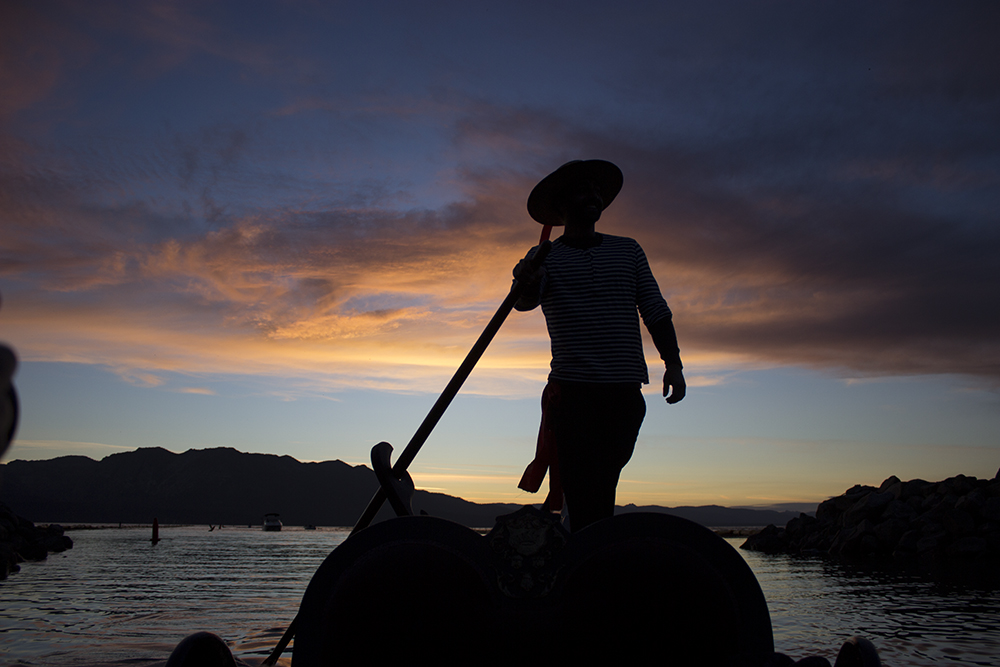 t’s easy to see that the Keys neighborhood loves having him around.

“I’m gonna guess 90% are vacation rentals, and 10% are permanent residents. Now, the 10% are hilarious! This lady right here will blast the Sinatra and then run in the house and hide. And this house, right here, he always comes out with an empty bottle of wine and goes, ‘I was gonna share, but I drank it again!’ I really get to know everyone here”

He’s more than just a novel sight to behold. He’s become an integral part of the local family landscape.

As we drift through the Keys a couple of kids run out of their house to watch us pass. At another point a woman pops her head through her sliding glass door and waves to Drew. We’re even offered cocktails by a few generous onlookers.

“Hey, you guys want some homemade margaritas?” A gentleman leaning out over a railing calls out to us as we navigate down a channel.

How could we say no?

Actually getting the liquid booty on board, however, proves a laborious endeavor.

The onlookers peer down at us from a railed lawn perched high above us in the channel. One gentleman disappears momentarily, then returns with two plastic blue cups, which he extends out toward us. With the lake level so low this year it’s a bit of a stretch for Drew to snatch the libations. I attempt to anchor the boat to the channel’s wall with my hand as Drew reaches for the loot. Almost… almost…

Drew ends up grabbing at thin air as the boat slips away, eluding the cocktails. But we don’t give up easily, especially not on homemade margaritas.

Round two proves a success. With a well-timed swipe, Drew successfully snags the contraband. We decide to linger for a quick chat, then move on.

We ask Drew what his hopes are for Tahoe Amore in the future.

“With couples, the romantic factor sells itself. What I want are more families. I don’t charge for kids, because, let’s be honest, they would probably rather be on a jet ski. Now grandma, on the other hand, grandma doesn’t want to go out on a jet ski.”

“I also want more girls’ nights out and bachelorette parties. I mean, I don’t charge a corkage fee, and if girls love looking at cop strippers and firemen… what about gondoliers?”

Whether or not he’s insinuating that behind those stripes lies a sexy gun show, I’m not sure. 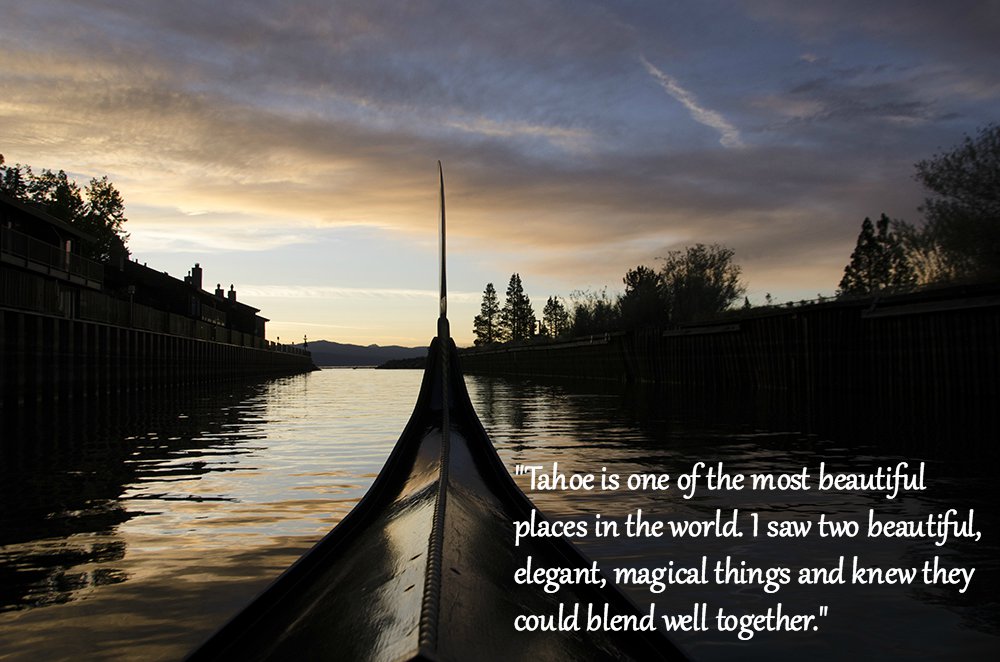 I chuckle at the thought of a dozen scantily clad bachelorettes in stilettos loading onto a rocky gondola. I imagine it would resemble a bunch of baby deer standing up for the first time. A party boat seems quite the undertaking for one gondolier; although, I can tell Drew knows how to show someone a good time.

And how does he stack up against other cruises on the lake, such as the Tahoe Queen?

“You know, I’m cheaper than the other boats in Tahoe. $135 may sound expensive, but you can bring your own food and drinks, and I don’t charge corkage!”

With all this talk of booze, I can’t help but wonder… what do you do when someone has to go to the bathroom?

My question is promptly answered.

Meech, who’s been squirming in the backseat for the past twenty minutes, finally blurts out, “I really have to go to the bathroom! Can we turn around now?”

The sky hangs dark. Drew turns the boat back toward the twinkling lights of the Fresh Ketch, where his gondola parking spot awaits. I’m sad our interview has come to an end. I feel as though I’ve experienced a new aspect of Tahoe I never knew of before. And who knew everyone in the Keys is so friendly! I make a mental note to bring my nephews trick-or-treating here this Halloween. I have a feeling they probably dole out really great candy.

But I do have one last question: What is it about Tahoe that he found worth pursuing?

“I’ve vacationed here for years. Tahoe is one of the most beautiful places in the world. I just took from what I saw (Tahoe) and from what I knew (the Venetian Culture) and put two and two together. I saw two beautiful, elegant, magical things and knew that they could blend well together.”

Indeed. Venetian gondolas offer up a totally new and unique way to connect with Tahoe. There’s something about it that’s just, well, more intimate.

And it’s just what Tahoe needs more of. 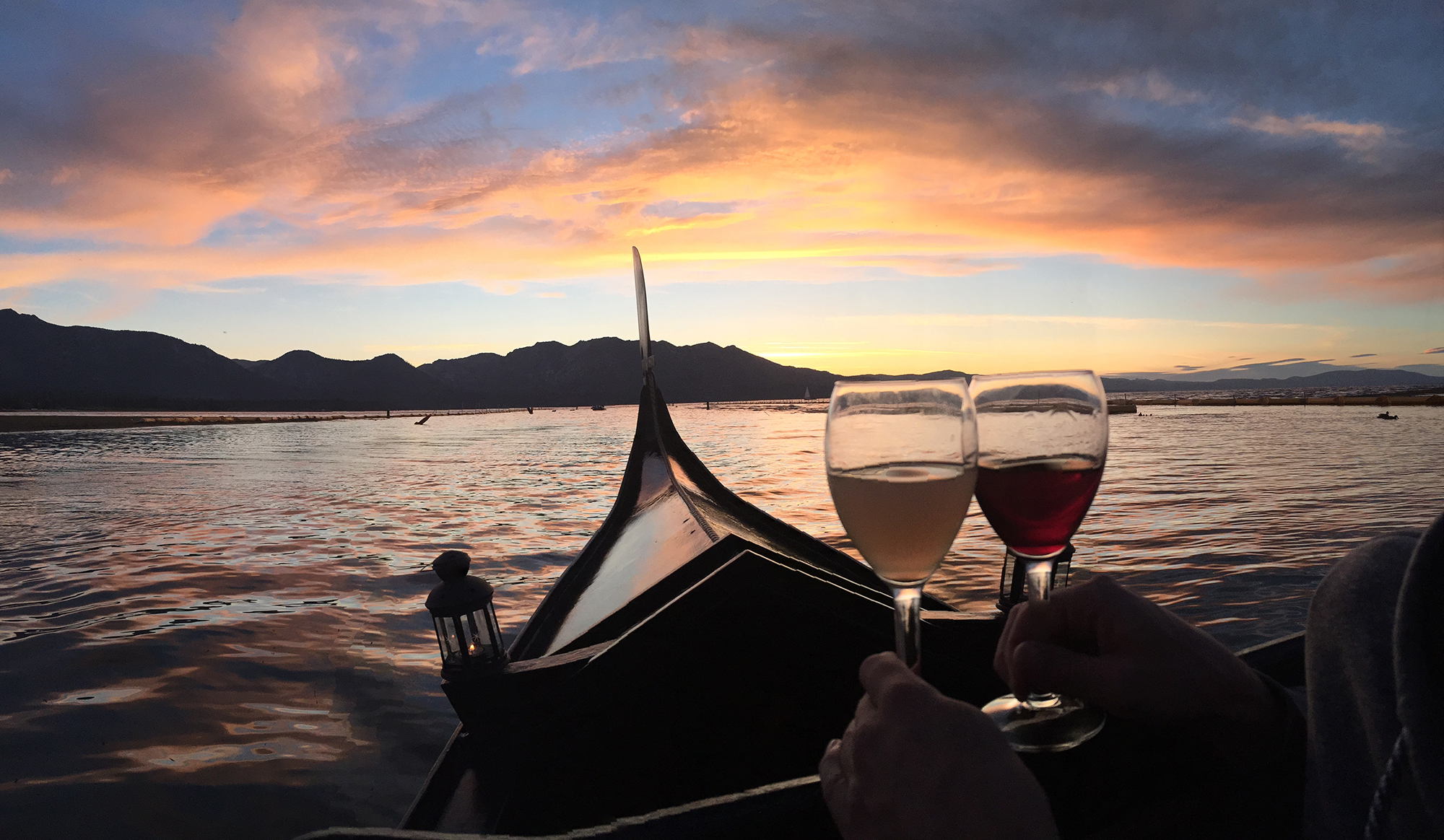 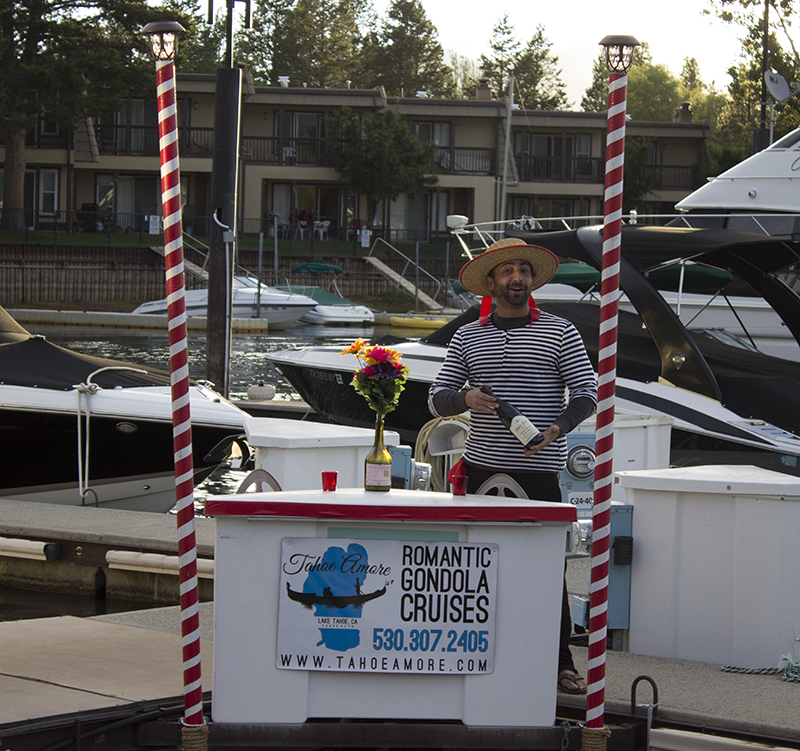 If you would like to learn more about Tahoe Amore or book a cruise, head on over to the Tahoe Amore website or find him on his Facebook page!

Alas!  ‘Tis my favorite eve of the week the night upon which I may drink for cheap and be merry with very lovely damsels indeed it’s the...
Read more
Adventure

When you step into Stitch Witch office, you easily find yourself swept away by the bustle taking place within. There’s a melodic cacophony that’s...
Read more
Lifestyle