This still shot from the video shows the massive bear as it huddles underneath Vance’s porch—a popular neighborhood hangout for bears. Vance videotapes the majestic creature before chasing it away so he can safely let his dogs out into the yard.

hen long-time local Vance Hopkins decided to capture a massive black bear huddled underneath his back porch on film last month, he thought little of it. His YouTube channel is chock full of bear encounter videos. Bears are nothing short of the norm in Tahoe. And thanks to his proximity to a meadow and several apple trees, Vance’s yard is a frequent pit stop for neighboring bears.

So imagine his surprise when, one morning, he woke to find his most recent video, titled, “BIG ASS BLACK BEAR UP CLOSE AND PERSONAL” had gone viral.

In fact, you’ve probably seen it by now. It involves a massive bear, a porch deck (or underneath one), and even a surprise (and stinky) twist at the end.

The video is provided at the end of this article (be sure to watch it in full screen!).

However, a cursory Google search (type “Vance Hopkins” or “Bear Poops”) and you’ll easily see the extent to which this video has permeated the internet.

Today Vance’s clip boasts over 4.5 million views on the internet and has been seen in over 215 countries/territories! He’s even been able to garner a profit thanks to a third party licensing agreement!

Needless to say, Vance’s curiosity has paid off.

What makes this clip so intriguing is how it manages to be equal parts shocking, suspenseful, scary, and funny. It feeds into our inherent fascination with how wild animals respond to humans (and vice versa?). It’s a peek into an experience most of us will never have.

Almost as entertaining as the video, however, are the viewer comments.

Reactions range from the admiring, particularly of his manhood….

Vance’s responses to comments are well calculated and thought-out. It’s obvious he wants people to understand his intentions.

But what exactly was going on in Vance’s mind while filming? How has he been dealing with reactions—good and bad? And what does he ultimately hope this video achieves?

Let’s meet the man behind the camera.

: Vance! There’s no denying in the video clip it seems like you harnessed some real  balls to get up close and personal with this massive bear. How were you able to capture such an intimate video?

V: Just got lucky that the bear did not return to the meadow before sun up.

:Were you at any point afraid or nervous? Why or why not?

V: Only enough to be very cautious. I had a planned escape route.

: What inspired you to film this bear?

V: It’s sort of a hobby. I will video tape any bear I see given the chance.

: Were you at all surprised by how much the internet took to your video?

V: I was a bit surprised as none of my previous videos garnered much attention.

: How do you feel about the spectrum of reactions your video has received?

V: I love all the comments—both positive and negative. Most are very amusing, mainly because almost all the people commenting don’t know what most of us [locals] know about black bears in Lake Tahoe.

: What have you learned from this experience? What has surprised you the most?

V: Bears can be very evasive and know how to hide very well. If they have their eye on a food source they will usually hide and wait until the coast is clear to move in. If a human chases them away, they’ll usually come back later to reinvestigate. Bears can be very determined.

: The thing about when you put content, any kind of content, online, people are ALWAYS going to have an opinion about it. Have you found the experience to be mostly positive? Negative?

V: Of all 1300+ likes on my YouTube channel only 41 are dislikes. As far as comments go the majority of them have been positive! 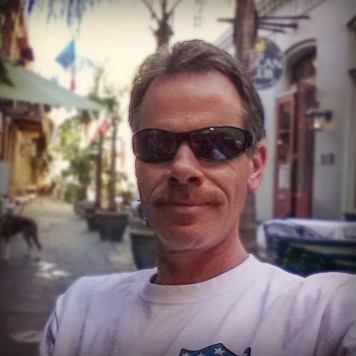 Vance’s got mad love for Tahoe and black bears.

: You’ve done a great job so far in providing calculated responses to commenters that aim to inform people of your true intentions and the nature of black bears. Have there been moments where you just wanted to lose it on an internet troll?

V: Yes indeed. And I have gone off on some and written back equally nasty comments and personal attacks. But I’m pretty positive I have never hit the send button!

: What is something you wish people would realize?

V: In my own case I wish people would just ask a few questions before making any judgements, as I read most comments and will reply to them. But I believe this is rare on YouTube and that’s probably why most viewers just post whatever they are thinking at the moment, be it good or bad, positive or negative.

: What’s the coolest thing that’s happened to you as a result of the video so far?

V: A couple of nice paychecks!

Also, my YouTube channel went from one subscriber for the last three years (a friend I asked to subscribe) to currently 81 subscribers. The video just recently broke 900,000 views on my channel, which was exciting. I hope to get 1 million soon!

: What do you hope people take away from the video?

V: A little excitement and a chuckle or two while they go about their day.

: Ok, and last but not least. The massive bear poop. Did you clean it up?

V: It got cleaned up along with the rest of the yard. This happened just before we did our annual winter prep—pine cone and needle removal and a few dump runs!

V: People should realize that if they can’t afford bear-proof trash containers then they need to get up early before the garbage truck comes and move their trash bins to the curb. Too many bears are being killed because when authorities are called to remove a bear it doesn’t always go well for the bear. There’s a good chance they will be killed after being deemed a nuisance, act aggressively, or just don’t leave the area right away.

“I love black bears. They are smart, beautiful, powerful animals.

I love black bears. They are smart, beautiful, powerful animals. Being able to photograph them on a regular basis is something very special that most people do not have the opportunity to do. I get a rush of adrenaline when filming bears and I have always been an adrenaline junky!

If I ever get mauled or killed by a bear (which I do not plan on ever letting happen) everyone should know I died doing something I love to do.

Check out the viral video below!