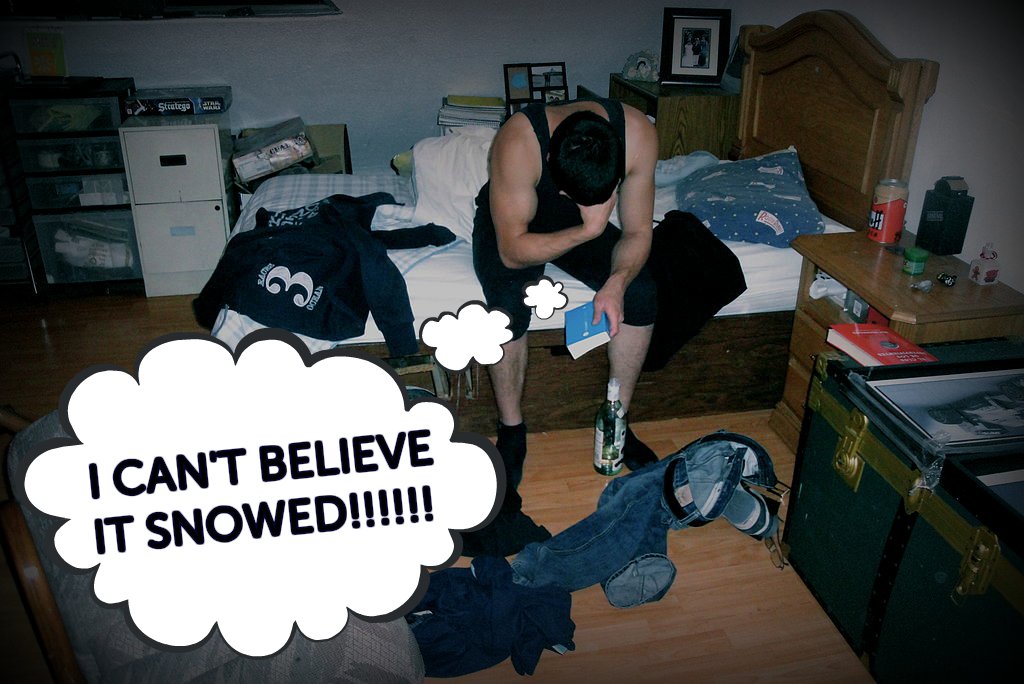 April has arrived and you’ve finally come to terms with the uncharacteristically warm weather in Tahoe.

Your shred gear has been collecting dust in the attic for about a month now and you’ve already logged 10 days at Kiva beach which means the dogs are stoked and you’ve got a head start on your summer bronze.

Girls have shaved their legs for the first time in five months and dudes are reconciling their short-lived winter careers by investing a fair majority of unemployment funds into PBR stock. You’re playing disc golf, biking around town, going on hikes, gardening, freeloading on the front lawn, and basically engaging in all of Tahoe’s finest fun-in-the-sun activities.

And then it dumps…

Tantamount to that psychotic ex who would flip a switch when you least expected it, Tahoe’s weather is often irrational as it is unpredictable. When you want snow, she gives you sun. When you want sun, she’ll bitch-slap you with snow, sleet, or some other wacky behavior.

As we all know, you can’t reason with the cray-cray. But by understanding the 5 stages of the Kübler-Ross grieving process, not only will you learn how to cope with Tahoe’s all-over-the-place weather patterns, you’ll be able to conquer them.

You’ve gotten ready for the day and have just stepped outside for the first time to realize not only is it freakin’ freezing…but there’s white shit on the ground? Oh hell naw, HELL NAW. You were just laying on the beach the other day, No WAY you are putting on a coat, NO WAY!! That thing is already in the attic!

You know what? It’s not even that cold, it’s barely a breeze. Yup, you’re wearing this t-shirt because, you know what, it’s SPRINGTIME DAMMIT! It’s probably not even snowing, it’s just your imagination. Because why would Tahoe do this three months too late, eh?

This. Is. Not. Happening.

How could they, the Tahoe weather gods, HOW COULD THEY!??! Do they realize how much money you DID NOT MAKE this winter because of this craptastic season?! You had to purchase your season pass on a credit card and now you’re paying 27% interest on unnecessary debt incurred for six measly days of snowboarding on DIRT! That’s 70$ per day of riding SHIT!

You just planted a tomato, DAMMIT! HOW WILL YOU GARNISH YOUR SALADS NOW?!?!

Your life is in shambles.

You had plans to go to Kiva today. You were supposed to toss the frisbee with the pooch and bathe in the sun and stare over at Tallac whilst thinking about how awesome Tahoe life is and how amazing this summer is going to be. What now?

You need a beer.

Screw it. You’re going outside and making snow angels.

Oh, an incoming call on the phone! Hm, who could it be? What is that they say, the crew is heading out the Kirkwood? Two feet of fresh, they say? Best snow they’ve had all season, they say?

WOOHOO, YOU’RE GOING TO KIRKWOOD! You’re going back up into that attic, busting out that shred gear, and getting fresh spring riding tracks!

SUCK ON THAT, BIPOLAR TAHOE WEATHER! YOU WILL ALWAYS FIND A WAY TO MAKE LEMONADE!